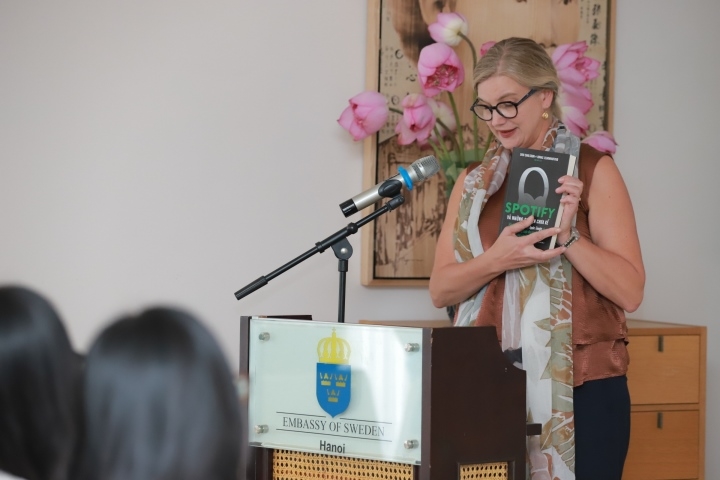 The Embassy of Sweden and Tan Viet Book on September 15 launched the story of that journey is told by two Swedish authors, Sven Carlsson and Jonas Leijonhufvud, in the book Spotify Play.

In her speech at the event, Ms. Ann Måwe, Ambassador of Sweden in Vietnam said that Vietnamese users have instant access to a wide range of local playlists expertly curated and regularly updated by Spotify’s team of Vietnamese music experts, alongside millions of Spotify and fan-built international playlists.

In addition, Spotify has personalised discovery features including Daily Mix, Release Radar, and Discover Weekly, so Vietnamese users can explore different songs from their favourite genre as well as a range of podcasts.

True to its title, the book tells many untold stories on Spotify's development. Interwoven into its journey are never-before-told interviews and conversations with famous figures such as Mark Zuckerberg, Steve Jobs, Taylor Swift, Jay-Z, Sean Parker, Pony Ma Huateng and Jimmy Lovine about their thoughts towards Spotify.

Due to its topicality, transparency and huge amount of information, the book has attracted the attention of readers as well as music experts, so Netflix has begun to produce a drama series about Spotify, based on this book. The book rights are also sold to more than 10 countries.

Swedish journalists Sven Carlsson and Jonas Leijonhufvud sucessfully deliver the dramatic and page-turning story of Spotify's spectacular rise to become a giant in the digital music service industry. The story of how technology has changed music and about the people who made that dream come true inspires many readers.

Spotify was founded in April 2006 and is today the world’s largest music streaming service provider. In Vietnam Spotify was launched in 2018.

The brand currently has around 5,000 employees globally and a catalogue of over 70 million songs; all available to both free users and subscribers.

As of 2021, Spotify has more than 50 million songs, more than a million podcasts and coverage in more than 90 countries with a user base of 350 million./.